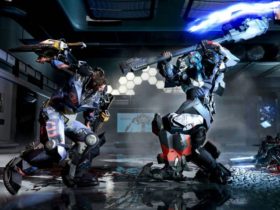 Arms released on June 16, 2017 for Nintendo Switch. This fighting game is developed and published by Nintendo. The game can be played together by four players. Each choose a fighter and then fight and try to knock out each other. The fight takes place in a 3D arena. While playing, players can attack, throw, block and dodge with the fighters. Here we will see how to play hoops mini-game in ARMS.

There are many mini-games in Arms. One of them is Hoops. This guide will show how to play this mini-game.

There are two ways to score in this mini-game.

Now, here are a few tips on how to play this mini-game like a pro. Most players will spam the grab button. When you see an opponent do that, dodge and perform a grab of your own. You can also punch your opponents and slowly fill the super meter. Once your super meter is filled, wait for your opponent to attack you. Dodge it and do a rush attack. The main thing to remember is to always fill up your super meter as quickly as possible as rush attacks almost guarantee a basket.

Also, go for light or medium weight arms here which allow you to quickly dodge and counter your opponent’s attacks.

Check out ARMS Guide: How to Unlock Ranked Mode