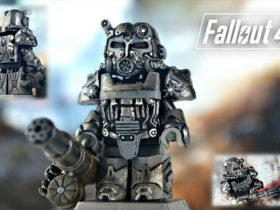 Destiny 2 is an upcoming online-only multiplayer game releasing this year in September. Developed by Bungle and in assistance, Vicarious Visions and High Moon Studios, this first-person shooter game will be for PS4 and Xbox One. The Microsoft Windows version will be coming in October. At present you can play Destiny 2 console beta game. Here we will talk about Destiny 2 Weapons Guide Part 1.

There are many exotic and awesome weapons in this game. You can get your hands on some of them during the Destiny 2 beta. This game has Kinetic, Energy and Power slots with you being able to choose whatever weapons you want to assign to one of these three slots. This guide is part 1 of the 2 part guide on the weapons in this game.

This is a Kinetic Auto Rifle and it can fire upto 300 rounds per minute with a clip size of 99. It is a gatling gun-looking weapon. It has a perk giving increased hip accuracy and automatically loads ammo picked up. You can get this weapon by playing the Destiny 2 beta homecoming mission as a Titan.

Here are the perks for this weapon.

It packs a great deal of damage and that’s not even including in the solar damage it can dish out.Sunhot exotic weapon highlights enemies and all of them are killed when this weapon’s blast explodes in solar energy, also damaging nearby enemies. It has a clip size of 8, firing up to 150 rounds per minute. You can get this weapon by playing the Homecoming mission as a Hunter during the Destiny 2 beta.

Here are the perks for this weapon.