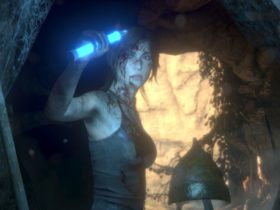 PS4 Pro Visual Upgrades for Rise of the Tomb Raider

You now know that the purple colour cannot be trusted. Go back to the Lightning Board to review the instructions. Do everything it says except the purple part. Now, go down the street to your right. Go down the two stair cases. Now, turn right as soon as you reach the pole where you ended up in the maze puzzle. And now at the crossroads, turn left.

You need to go to the thick steel post by the road near the place where chocobo races commence. See what the purple ink tells you and do exactly the opposite. Go to the place with a moon icon. An assassin there will ask you a question. Both answer choices are wrong so there’s not much you can do here. Now, open up the map to notice that the butterfly icons are now purple. Yes, this means the butterfly board is misleading you. Whatever the Templar envoy told you is a lie as well. Now, go to the sun board which is actually the Templar’s insignia. You have to get rid of it. Go to the shop in the alley and sell it for 999 gil.

Go back to the moon icon and talk to the guard again. Select purple. He will let you pass as you don’t have the pendant anymore. At the end of the alley, you will find the prize – the Medjay Assassin’s Shield and one final note.