Home Featured Tags on the Maps in Minecraft 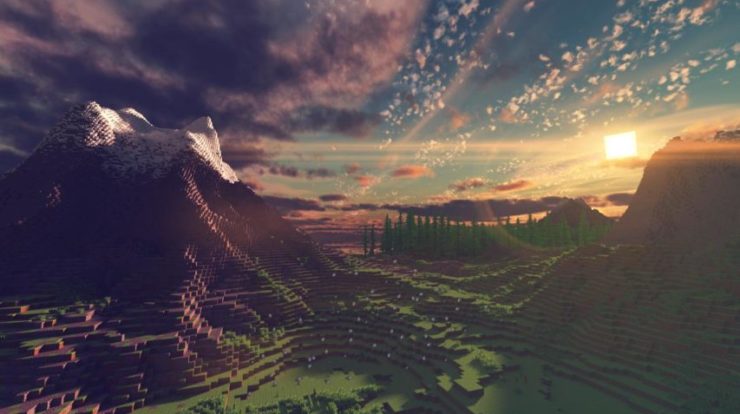 To remove a marker from the map – remove a copy of the map from the frame. The green mark will disappear.

When you close the world and re-enter, all the green labels disappear from the cards. To restore the display of labels, it is enough to go to the place with a copy of the map in the frame, at the distance of the display of the chunks you have set.

Starting with the beta version of the Minecraft 1.13 Java Edition, the ability to set markers on the map with the help of flags is added. Setting or deleting the marker is done by right-clicking on the flag with the card in hand. This card can be kept in the left hand. The color of the marker depends on the color of the flag.

Maps in the Lower World show a chaotic mixture of red and gray. If you try to draw a map in the Lower World, then the study area will be three times smaller than usual. It is even more difficult to orientate on such a map because the pointer on it will behave erratically (as in the case of a compass or a clock), but at the Edge such an effect is absent.

The number of cards in the game world is limited to 65,536 (cloned aren’t counted). If the number of cards in the world exceeds the allowable value, then when creating the card, the player will receive a message: “Can’t craft map: too many maps”. The cards record only the surface, but Notch said that: “Drawing caves on maps is an interesting idea”. Notch also said that the ability of maps to save information will help in creating books that are written by players, or even pictures/tablets with a hand-drawn texture. Notch planned to make the possibility of placing maps on the walls. From version 12w34a, this is implemented with the help of a framework.

On a framed map, its location is displayed with a label similar to the player’s mark, but a light green color. The direction of the label is the direction from the wall on which the map hangs.

You can rename a map by giving it a terrain-related name – this will make it easier to find the right map if you have many. Under the water, the map, like other objects, approaches the head of the character, which makes it possible to see the map better.

A card and a stretched bow are the only items that a player holds with both hands (however, when using a shield the player holds the card in one hand).

Gravel on the map has a pale yellow color, and the sandstone, on the contrary, has a gray tinge. This makes the temple in the desert much more visible on the map.

Destroying all instances of one card will not lead to its removal, but will make it unused. That is, information about the terrain explored on the map will remain in the files of the world or the server, but it can’t be viewed by playing means without the authority of the operator. The server operator can receive or give to another player an instance of the destroyed card using the /give command.

If you change the view by pressing F5, it will be seen that the player holds it with one hand, but when looking from the first person, he holds it with both hands.

In the chest in the fortress library, you can find an unknown map with the texture of the examined map, and when you guide your mouse over it in the Windows 10 edition, the game lags. Even if you cut a chest with a map, then when you move the cursor on it in the inverter, the game still lags.