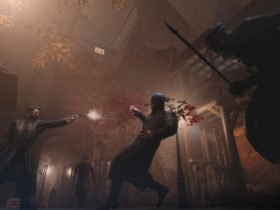 Vampyr Guide: How To Upgrade Skills, Bite And Drain Blood

The popular anime is getting its official video game release in 2016.

Publisher Koei Tecmo has released a brand new trailer for the game. The trailer confirms the release date of February 2016 in Japan for the Attack on Titan Video Game. The upcoming action game will be released on PlayStation 4, PlayStation 3 and PS Vita.

The Attack on Titan Video Game is under development by Omega Force. The studio has worked on several action games before this including Dynasty Warriors and Hyrule Warriors.

The game will be based upon the first season of the anime. Characters from the show including Eren, Mikasa, Levi, Sasha, and Pixis make an appearance in the trailer. The footage also focuses on the horse-riding gameplay. The 3D manoeuvre gear is also featured showing how it works out in-game.

There’s no word on the western release of the game though an English teaser was released earlier this month.