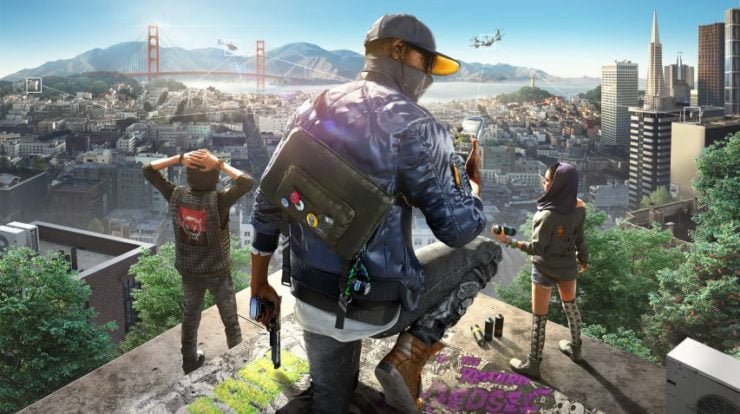 The first Watch Dogs game aimed to compete with Grand Theft Auto V for the title of the best open-world law-defying running-and-gunning simulator. It did not succeed, though it wasn’t for lack of trying. It had an interesting hacking system, plenty of guns, and a large city to explore. Its gameplay was built a solid framework, but it lacked polish. It offered hacking, but it wasn’t deep and game changing enough. But most importantly it lacked the humanity factor that GTA series is so good at implementing into its stories and characters. Watch Dogs uninteresting protagonist Aiden Pearce was its worst enemy, very hard for the players to sympathize with or.
Can its successor, Watch Dogs 2, pose a challenge to Rockstar’s magnum opus? It certainly can survive such comparisons, but can it win?
With Watch Dogs release date still nearly a month away, it is hard to speak for the story. We do know a fair bit about gameplay elements, however, which allows us to compare the essence of both games.

Grand Theft Auto V and Watch Dogs 2 are both unmistakably open-world games. The area of operation offered to the players by either game is a massive urban environment, with several supporting zones. For GTA V it is Los Santos, a reimagining of Los Angeles, meanwhile Watch Dogs 2 gameplay takes the player to San Francisco recreated as faithfully as possible in a video game.

Watch Dogs 2 definitely deserves a point for authenticity. Numerous reviewers familiar with San Francisco praised the attention to detail the Ubisoft developer team paid to recreating some of the city’s iconic locations. It is clear that lessons learned from Assassin’s Creed series weren’t wasted. Running around such painstakingly recreated and compressed city evokes the same feeling of authenticity a recreated Venice or Boston did for Assassin’s Creed games. A sense of interaction with a real place. And judging by both favorable previews and Watch Dogs 2 trailers, the city will be an outstandingly fun place to throw into chaos.
On the other hand GTA V developers had a free creative license provided by building a city from scratch. Modelled after Los Angeles, of course, but avoiding the compressed space and planned out as a functioning city. Authenticity was traded for realism and believability.
In effect, the choice is up to the individual players. Watch Dogs 2 offers an authentic, although compressed tour of San Francisco, down to the landmarks and key tourist attractions. Grand Theft Auto V gives us a coherent but, despite all the inspirations fictional city. Both games did really well what they intended to do, so superiority is only a matter of preference.

What good is an open-world game when the scope of activities and options available to the players is limited? Once again, GTA V and Watch Dogs 2 take different approaches.
Characters in GTA V have a lot to do outside of their story missions. Golf, stock market, random rampages, racing, Grand Theft Auto V’s world gives its protagonists a ton of activities, but in a way it is one-sided. The world remains mostly unaffected, but the characters, and the players, enjoy themselves greatly nonetheless.
In Watch Dogs 2, on the other hand, the players are given a remote control to the entire world. Even if WD2 will lack the amazing variety of activities known to GTA V layers, there will always be the next new thing to hack, or the next city-wide chaos to spread with just a couple of clicks on Marcus’ laptop or smartphone. This is what the Watch Dogs 2 gameplay focuses on: letting the players creatively play with the game environment and NPCs.

Where Grand Theft Auto V primarily offers players a number of activities to choose from, Watch Dogs 2 gives the players a toolset, an open world, and trusts they will find new ways of being entertained with the freedom offered to them even when not doing story or side missions.

The competition between multiplayers modes of GTA V and Watch Dogs 2 is a question of scope vs focus.
Grand Theft Auto Online, the multiplayer mode of GTA V, is so expansive it was released separately from the main game. It offers several modes, from mission-like Jobs to a free-roam mode allowing up to 30 players to interact on a map of Los Santos. Team-ups, spontaneous murder sprees, and more are all available to the players. In a sense it is a multiplayer-enabled map of the base game.
In turn the Watch Dogs 2 multiplayer trades scale for focus. The game is co-op compatible, and has an obligatory PvP mode, but the WD2 multiplayer shines with the Bounty Hunter mode. It only allows four players to meet on a single map, in two different set ups. It’s either 3 versus 1, where a player who accrued a bounty on their head is hunted by three other hackers, or 2 versus 2, with the running team composed of the bounty and the Defender. All characters participating in the game reap at least some benefits, regardless of end result of the hunt. A hunt, it must be mentioned, where all participants are hackers and can play with the environment.

Outsmarting and out-hacking your enemies is a key element of Watch Dogs 2 gameplay experience and it transitions seamlessly into the multiplayer. If you are hunted, you never have to leave the game, the hunters will appear right in your playthrough, just like they did in the first Watch Dogs.

Taking into account the gameplay features that can be compared across the two games one thing becomes clear. They are doing things in the same categories, but they approach them quite differently. It’s not a question of which one is better, it’s the question of which one is better suited for your preferences. Both are triple-A products developed by experienced teams, with clear vision for what they want their games to be. The two visions are similar, but not identical, and neither is going to have the upper hand in terms of quality. The best way of figuring out whether Watch Dogs 2 is going to be the one that is better for you is securing a pre order copy before the release date and being among the first people to test its features fully. Watch Dogs 2 comes out on 15 November 2016.