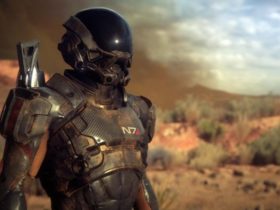 A Snapchat user posted a preorder card for Call of Duty: Infinite Warfare’s Legacy Edition at Target retailer. As per the post, we can see that the preorder card indeed reveals that the Legacy Edition will include a remaster of Call of Duty 4: Modern Warfare. Another thing to notice is that it looks to be a Modern Warfare 1 remaster. However, it can’t be confirmed at the moment. We need to wait for the official announcement.

The Call of Duty Infinite Warfare Legacy Edition poster leaked with something written at the bottom of it. Here is what is written,

We also get an important information from the card. The card displays the main person holding a helmet. Now that seems futuristic. So get ready as The Call of Duty Infinite Warfare Legacy Edition is set to release on Friday, November 4, 2016.