Home Featured Dishonored 2: Things You Must Try During Gameplay 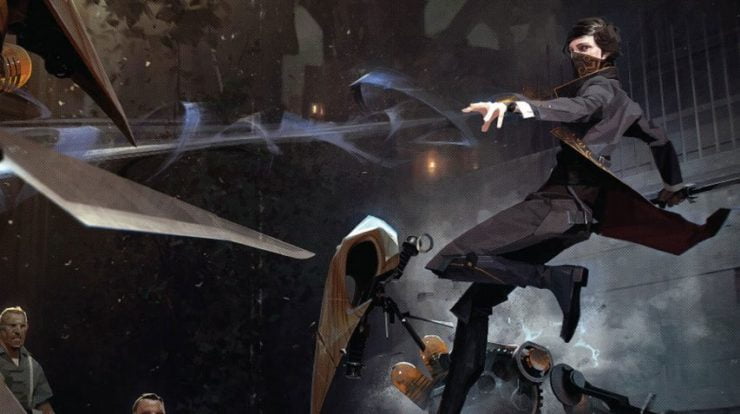 Back in 2012, Dishonored became an instant hit thanks to the perfect blend of creative tools and the complete freedom to use them as the players wanted. This led to a number of videos showcasing players being both really skillful and really imaginative. Chaining powers, gadgets and regular weapons, they made sure that Corvo, the first game’s protagonist, was the most dangerous man in town. In any town.
Dishonored 2 perfects the excellent formula of its predecessor and has even more toys for which to find creative uses. The powers of now adult Emily Kaldwin are completely different from Corvo’s, and open new opportunities for inventive players. Choose Emily or Corvo and see how either deals with the challenges ahead.
Here are several things everybody must try doing when playing with new systems and otherworldly abilities of Dishonored 2.

Some of Emily’s powers are better than the others, and these are the Domino and Far Reach powers, already well known from gameplay trailers. Domino allows you to link the fates of several enemies, so what happens to one, happens to all. The other is a grappling hook weaved out of the shadowy matter of the Void. There are many things to try with those two, and the first one involves a mechanic already familiar to those who played the first game: drop assassination.
If you ever get caught in an unfair fight (this being one where it’s the enemy side that has the upper hand) try linking them up with Domino as a setup, grabbing a high ledge with Far Reach (there are always high ledges in Dishonored 2), and drop assassinating one of them for the elevated position. If you succeed, all others caught in Domino will drop alongside him, bleeding from arteries never touched by your blade.

The surge of vertical motion involved in this maneuver is certain to give you a rush great enough to do it repeatedly over your playthrough.

Guide them into the Wall of Light

Among gadgets you can play with is a handy rewire tool, giving you a limited measure of control over Dishonored 2’s various machinery. One example of this machinery are the Walls of Light, the friend-or-foe discerning gateways burning to ash everyone not authorized to pass through them. They are regular obstacles both Emily and Corvo encounter on their missions.
Until they get the rewire tool, that is.
Switching the Walls of Light is a surprise enough for any guard caught in the scorching arcs of electricity, but with Domino and Far Reach this surprise may come sooner and more effectively than ever. If you upgrade your Far Reach in a particular way you will get to grab and drag your enemies towards you to incapacitate them mid-air. But instead of noisy disposal of one enemy, you can use Domino on several, rewire a Wall of Light, and drag one of them through it. The town will lose several city guards, but they will all be disintegrated by the power of the Wall of Light travelling through the Domino link, so at least bloodflies will not build more nests.

Become the architect of death

While Emily has all the new powers, Corvo has spent a long time working on his. His iconic powers are now more functional than ever. With proper upgrades and gadgets in the pockets Corvo is able to orchestrate complex schemes even without Emily’s Domino, all within the space of heartbeat.
Try for instance using Windblast to set your enemy flying towards a group of other opponents. Stop Time and attach a spring razor mine to your suspended victim, then use your Possession power to move other enemies within range. Move away before un-stopping time and enjoy the spectacle of death as the Windblasted guard slams into his friends just as the mine triggers and cuts them all to pieces.

Become the judge, jury, and executioner

Among the many gadgets given to players in Dishonored 1, The Heart was the most fascinatingly bizarre. A still beating human heart with steampunk attachments, whispering in your mind about the dirty secrets of every NPC you see. After fifteen years, it is still beating, and still eager to reveal to you that which is hidden. Dishonored 2’s new Chaos system takes notice whether you kill the corrupt or the innocent, and The Heart lets you find out who deserves to die and who doesn’t.
Depending on your initial choice, either Corvo or Emily will get to become the judges of Karnaca’s citizens during their missions, making Dishonored 2 gameplay the closest we have ever been in video games to playing as a justice-dealing deadly vigilante.

This is the challenge to the truly dedicated. The selection of gadgets in Dishonored 2 ensures that lethal, unforgiving playthrough is not only supported, but constantly tempting. There is, however, the higher road. Outsider powers can be used without taking lives, there are gadgets than will not kill. There are corridors and ledges letting both Corvo and Emily pass the levels undetected until they wish to be noticed.

Even your targets, the corrupt, crooked, and insane can be spared, although they may wish they weren’t. Both Emily and Corvo are just as creative as the players, and their enemies may well suffer fates worse than death for acting against Emily’s rightful rulership.

For extra challenge, refuse to accept Outsider’s gift and show how good you are as a regular, highly trained human being. Your choice.

The much-anticipated Dishonored 2 steadily grows in popularity the closer we get to the release date. If you want to join Emily and Corvo on their quest for justice, pre order and be prepared for the brutal freedom as you run through the sun-burnt streets of the island of Serkonos. The journey begins on 11 November 2016.