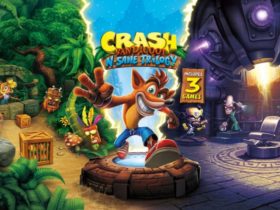 This review of DOOM  is an evaluation is sorts of one of the most hyped games of 2016 after the hype and after everyone has stopped talking about it. Let us see how it holds up.

Step into the jaws of HELL in the DOOM reboot, the past faced, gory first-person shooter developed by ID software who laid the foundation of modern FPS games with their original DOOM, released back in the early 90’s.

Playing DOOM sure brings back memories about the original DOOM and sure makes you feel the hellish craze and adrenaline pumping action, but the new Doom is louder , faster and more glorious than the older version. The game throws waves of demons at you and you have only one job in the game for which you were born to do, that is kill demons and you will stop at nothing to achieve your goal. No matter how big the demon is or how powerful it is you will kill it(unless you are in Ultra–nightmare mode) and you will stop at nothing.

You will rip out the jaws, cut your biggest enemies in half with a single chainsaw swing and glorify your kills with the new ‘Glory kill’ system. As you progress through the game you sort of alternate between Mars and the depths of Hell killing demons, unlocking the story and at multiple stages, the game becomes almost predictable but the sense of boredom as you progress immediately disappears the moment you enter the blood-filled battles. And adding to that moment of excitement is the Heave- metal soundtrack which is super satisfying and perfectly blends with the gameplay elements. The more you progress the more weapons you unravel and more the variety of options yo get to kill demons. But, all guns and launchers are not created  equal. Each of the guns has its own advantages and disadvantages. Adding to the variety of weapons you will find are the continuous upgrade points which allow you to add attachments and upgrade your preferred to your own liking. Keeping the guns and rocket launchers aside you have the most satisfactory and awesome enemy dismembering technique, the Glory Kills. Enemies occasionally drop health boosts and ammo, after you kill them , performing a glory kill after the enemy is near death, will definitely drop  some health or ammo packs. These Glory Kills come in real handy in near death situation  where you are in dire need of a health capsule. The chainsaw also helps in situations of low ammo. If you are in need of ammo or you are not able to kill a boss, just go to point blank range and tear apart its’ body with the chainsaw which results in their instant death and a lot of ammo spills out of their corpses. Despite its repetitiveness the ever growing horde of demons and the increasing  durability of the demons as you progress through the game, keeps you stuck to your screens. Furthermore, keeping in mind the increasing strength of the demons you have to upgrade your weapons systematically in order to keep up with the violent fast paced gameplay which is offered to us.

When the battle is over and all the demons are dead and you are granted access to progress in the game, comes  a part of exploration and search for secrets. The secrets in the game are well hidden yet when found give a certain amount of satisfaction which is a major part of Doom. There is a lot to explore and a lot of secrets to be uncovered. But after some time, this becomes boring and you crave for more demons to kill. This is a part where the new DOOM fails. I had wished for a more interesting exploration time, but no matter where the secret is hidden you will definitely get bored of it. The exploration system sure makes the game monotonous.

The campaign is the only strong factor of the game according to me.

The campaign is super enjoyable and satisfactory. But, is that the only thing we are paying 60 USD for ? No, we also have multiplayer and snap maps. We will get to snap maps later.

The new dishes in the menu of Doom are the Multiplayer and Snap map. The multiplayer has 6 game modes. Starting with team deathmatch (TDM), which is nothing new. The match length is as most of the gamers out there know by now is 10 minutes and you have to kill your opponent. The new thing is the Demon rune power-ups in the match which lets you transform into a demon and rip your opponent apart.

Then there is Soul harvest, in this, you not only have to kill your opponent but collect their souls in order to it to really count and add to your score. You kill you  enemy and they drop their soul for you to pick it up or for their teammate. One nice thing about this mode is that the Demon Runes do not expire, like in TDM. The one,y has to kill you if your Demon is to be stopped.

Next, there is Domination mode , where you have to dominate areas and keep the domination in order to win the round .

There are 3 other modes which are Warpath, Freezetag and Clan Arena. Unfortunately, I did not find any multiplayer match in these modes. whenever I search for matches in these 3 modes I hardly find 1 or 2 players who usually disconnect after 2 minutes or so. And honestly, who will wait for around 5 minutes for the lobby to be full and the match to begin? It is not that I have not played those modes, but as I don’t matches and longer in that mode I will not elaborate on that.

The only place where I sometimes find matches, i.e once or twice in a week, is the TDM mode.

I am very disappointed in the multiplayer mode. And I honestly don’t think just the campaign is worth the 60$ price tag. For the price to be worth it the multiplayer should be functional. But, unfortunately, it’s pretty much dead.

The snap maps mode is a lot more successful than the extremely disappointing multiplayer . In this, you can create your own maps, both solo and multiplayer. The tutorials are pretty intuitive and anyone who has the patience can get to create their own maps and levels. There is a really large variety of maps, both single, co-op and multiplayer in the snap maps section. The snap maps part is something that I enjoyed and it felt unique too to some extent.

To be upfront, the multiplayer is dead, and I no longer find any matches online and the unresponsive servers and connection issues add to that . But, the snap maps are a good addition and is something to look forward to. The snap map is pretty awesome and enjoyable. But, I won’t keep my hopes high as it might die too just like the multiplayer.

Therefore, is DOOM worth your money ? I would say no. It is overpriced. With a dead multiplayer, an obvious campaign and on the edge Snap map mode, I would say it is not worth it. If yo do want to get your hands on it and fight hell. Then wait for Steam sales or buy it with a few bucks off on some other game marketplace.

November 20, 2020
Load More
Please support this website by adding us to your whitelist in your ad blocker. Ads are what helps us bring you premium content! Thank you!