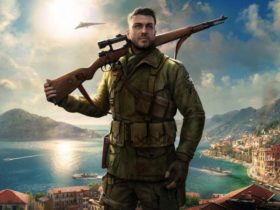 There are a few difficult bosses in the game and this guide will show how to beat one of them – Elder Alarum.

This boss has the ability to switch its color. He can also fly and generate shields frequently. The fight takes place on a small narrow platform and he also spawns add-on enemies. This fight is difficult so use Seth to deal long range damage to this boss. Continuously using charge shots will make this boss go down.