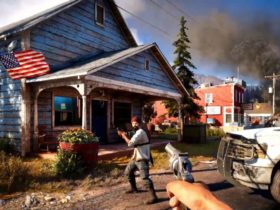 Ghost of Tsushima first gameplay is revealed. It is an open world game like never seen before.  Sucker Punch Productions is the developer behind Ghost of Tsushima. The first look of the game is very promising. We can expect something mysterious and exciting coming soon.

The game is set in 13th-century Japan. This open-world samurai adventure is set during 1274 Mongol invasion of Japan. Well it will certainly not be for the faint hearted as in Ghost of Tsushima, the protagonist will be amidst war, chaos, and violence. You will be playing as Jin Sakai. He is a powerful samurai warrior set take revenge from those who did wrong. You can see Jin Sakai with Katana in the gameplay. The game will have vivid details about Japanese history.

Check out the Ghost of Tsushima E3 2018 Gameplay Debut below.

Jin will have Masako by his side in his fights. She is also a samurai – a deadly onna-bugeisha. Although Masako will be with Jin, due to circumstances and Masako’s history, there will be duel between the two. The game will be one fantastic creation of revenge, hope and empowerment by Sucker Punch. There is just a lot in the game than what we know about right now. We can impatiently wait for Sucker Punch Productions to reveal the release date.