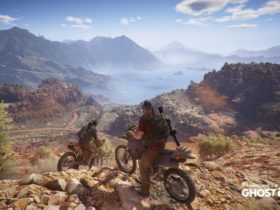 In the biggest Space Engineers update so far, the much-awaited feature has been added. The planets follow the same properties of space rocks being destructible, volumetric and persistent. The planets are have diameters as big as 120km and 45 238, 93421 km2 surface area. There’s also gravity on the planets that affects all objects around it.

Planetary Features
– planets and moons (tons of new assets, sounds and textures added)
– planet types: Earth-like (atmosphere with oxygen), Mars-like (no oxygen, thinner atmosphere), Alien (low oxygen, denser atmosphere)
– moon types: Earth-like Moon (no atmosphere), Europa (thin atmosphere, no oxygen), Titan (thin atmosphere, no oxygen)
– planets are 120km and moons are 19km in diameter by default
– Earthlike + Alien planet biomes: desert, woodlands, mountains, ice-land, poles
– gravity: roughly 1G on planets, 0.25G on moons (but gravity depends on type of the planet/moon)
– weight affects the behavior of all ships in natural gravity – the heavier a ship is the more thrusting power is required to fly/move
– planets and moons are persistent & fully destructible – anything you build or destroy will stay there forever. You can even dig through the planet if you want!
– different vegetation on alien and earth-like planets, flora destruction
– you have to start new world with planets enabled
– planets are not randomly generated in a world, they are placed there. But a planet/moon surface and materials are 50% pre-made assets (height-map) and 50% generated (ore nodes, voxel types, textures, etc.). It is possible to prepare your worlds in creative, place the planets where you want them and switch to survival if you wish. You can also publish any world premade like that on the workshop
– adding planets in creative mode: Shift+F10, you can customize the size and type of planet/moon you are adding
– visible ore sites on planets (darker areas) that can lead you to rich mineral veins. There are three different tiers of ore deposits
– platinum is found only on moons and asteroids, uranium is rare on planets
– autopilot is capable of flight above the planet’s surface with evade collision enabled. With this on though, it won’t fly closer than few tens of meters, so if you want them to fly inside a cave system, you will need to uncheck collision and make gps coordinates carefully

New Starting Worlds
– Earth Easy Start: you start on a habitable planet with a set of basic vehicles. Your survival is threatened by attacking pirates who set up shop within range of their drones
– Mars Easy Start: you become a colonist on a barren, inhospitable planet. Make sure you secure a source of ice soon. Also beware of local pirates
– Alien Easy Start: the alien planet is a place with very sparse oxygen, not enough to breath freely. There is hostile fauna and pirates who want to claim the riches of this mysterious world and are not willing to share
– Moon Easy Start: you start on a moon orbiting a habitable planet. Your base is under attack by pirates
– Empty Star System: it is a star system with 3 distinctive planets and their 3 moons. Except for local fauna, planets are uninhabited (no pirate threats)
– more starting worlds will be added soon (e.g. crashed ship and more)

AI Enemies, Fauna
– sabiroids (what is known by community as “space spiders”): can be found on Alien planet type and on Titan type moons. They can destroy metal blocks and attack players. Their favorite hunting strategy is hiding in the ground and un-burrow to surprise their prey. When players kill a spider, new spiders won’t appear in the area for some time. Sabiroids also store few components inside their bodies from objects and blocks that they consumed.
– pirate bases: can be found either in space or occupying planetary surface. They have bounty hidden inside their containers that players can loot if they get over the drone attacks. There is one pirate headquarters on every planet, which is well protected and filled with traps and loot.
– enemy drones: they spawn automatically from pirate bases and attack the players trespassing into pirate territory

New blocks and components
– new block: Atmospheric thrusters – powered by electricity, working only on planets with atmosphere
– current (ion) thrusters are more suitable for environment without natural gravity (space). They are weak near moons and really weak on a planet
– new block: small ship air-vent that is crucial for piloting ships without the helmet – it is important to be set to depressurized (blue indication)

Minor changes
– gravity generators are not working in natural gravity. The generated gravity becomes weaker and weaker with more natural gravity and from 0,4g of natural gravity the generators are not producing any artificial gravity fields at all
– jump drives are not working in natural gravity
– cargo ships cannot be switched ON for worlds containing planets for now (this is only temporary change)
– jetpack’s power is based on the environment and the G strength (1G = 7 seconds of fuel). They can’t be used the same way as they are in space
– possibility to setup max speed for wheels
– possibility to activate horizon + height indicator in all cockpits
– solar + battery is the way to power your grids from the start on planets. Reactors become viable only in the later stages of the game when you get to space and find rich uranium deposits, because uranium is a rare find on the planets
– slight area of effect nerf for hand drills