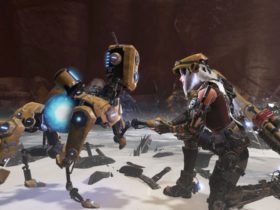 The game is a first-person co-op slaughtering game featuring melee action and set in the apocalyptic End Times of the war-torn fictional Warhammer game worlds. Five main heroes in the game join forces to take on a destructive Chaos army and the swarming Skaven horde. You can choose between 15 different career paths with a plethora of skills to unlock and a number of customizable things.

To get new and better gear, grimoires are the best way to do so. It allows you to open better loot boxes and chests during Renald’s Gift. However, the downside is that picking up grimoires reduces your overall health making the rest of the level more challenging so it’s a gamble. And you cannot even drop it. Hence, be sure to master the game before attempting to get better gear via grimoires. On that note, follow this guide to know the location of all grimoires in the game. This is Part 1 of the three guide series.

Enter the barracks. Jump over a turned bed to reach a path leading to a stack of boxes. Look to your right to spot the first grimoire near the ceiling. The second one is found when you leave the final castle. After you exit, look to the right and finish the jumping puzzle to reach the window on the other side. Now, find a lever on the opposite side of the room and activate it to lower a ladder outside. Now, jump to the ladder and climb up to reach a platform to find the grimoire in a wooden crate.

First one is in the Northern Maintenance Shaft. Open the door on the left at the bottom of the stairs. Press the wrong button in the order to open it. Reach the back room at the end of the doorway and find a brick on the top shelf. Interact with it to open another door on the outside of the back room. Go to the new room to find the grimoire inside a hole in the wall. The second one is found when you drop into the Old City Cesspit. Search around for a set of keys. Leave the Cesspit after getting the keys and come to the room with two beams running across. Jump onto the beams and follow them to the opposite side of the room to reach some more corridors. Find a chest wrapped in chains at the end. Use the keys to unlock it to get the grimoire.

HUNGER IN THE DARK

Find the cart and once you get the task of escorting it, get four barrels and bring them to the area. After you lose sight of the cart, move forward till the rails turn to the left. Turn right and move down the corridor. At the end of the path, place the barrel down against the wall upon a prompt. Do this to blow up the wall to gain access to a ladder. This will lead you to a small area with the grimoire in a crate. For the second one, continue on with the mission till the cart barrels through a set of doors and off a cliff. Turn to the left and enter the Charnel Hollow and look for a small hole on the right. Crouch to move through the hole and climb up the ladder in the end. At the top, jump up the rocks along a wall to reach a new ledge with an ammo box. Scan the wall to your right to find a small hole with the grimoire inside.

The first one is found when the buildings start to slide off the cliff. See a building down that is mostly still upright. Drop down to the building and look inside. There will be a bookshelf with the grimoire inside. You will find the second one in the entryway leading to Stoltzhammer Weg. Look for a building on the left with a raised ladder. Shoot the Feculent Bebo at the top. It will then release the ladder, allowing you to climb up to get the grimoire.

Go left from the start of the wilds. Follow the wall and climb up the steep rockface. At the top of the cliff near the base of a tree is the first grimoire. To find the second grimoire, you will have to find three bricks which open up a secret chamber. To find brick one, head up the wall you pass through when continuing through the ruins. Look on the left side for this brick. From there, reach the second elevated path and look for a supply crate with this brick. Head up the stairs on the opposite side of the area to reach a third area. Look for this brick in the back corner, behind some brush. Check out the chamber that was opened near the third brick and head inside to get the Grimoire. That’s all about Warhammer-Vermintide 2 location of all Grimoires part 1.