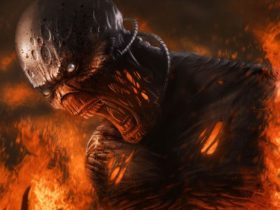 Enter a universe full of bright glowing neon stars and fractal nebulae that react according to the music beats and get ready to immerse your senses in the beautiful, starry universe of Polynomial 2.

Polynomial 2 is the sequel to the game ‘The Polynomial’ which was released back in 2010, and it was an indie hit. The same can be said for the sequel too. This game is one of the best games in the indie category that I have played in the past years. This game developed by Dmytry Lavrov is truly a masterpiece which combines artistic imagination with modern computational power.

The first instalment in this series was a bit underrated as it lacked a bit in its gameplay, but in the sequel that problem has been well dealt with. The emphasis has been more on the action and the gameplay this time which does not mean that the other aspects aren’t good, but the gameplay makes a greater impact on the minds of the gamers. There are 9 different levels in this game with different objectives and comparable yet uniquely different scenarios in each of the levels. Along with 9 main levels there are 2 extra survival and insanity levels. The survival level is as all of us know is a survival level, with waves of enemies coming at you with the intent to kill and you have to kill them all keeping in mind that the difficulty of each enemy increases as you progress through the waves. And then there is the ‘insanity’ level, which is basically a survival level with all guns unlocked, health regeneration and difficulty levelling up with each enemy you kill.

The gameplay is really enjoyable keeping in mind that this is an early access game. I enjoyed every moment of the game and adding to that intense gaming period is the 40+ minutes of original soundtrack. The game animations change as the beats and rhythms of the music changes. If you get bored of the original sound tracks, then you can also add your own songs in the game and what better way to kill your enemies while listening to your jam, right? Given this game is in early access, I personally didn’t experience any bugs or glitches so that’s a plus. The game has enough content for an early access game. And enough fun to get you hooked to your PC. The game feels pretty good at this stage. I wonder what more will be added in the final release, I hope there will be more variety of weapons, and more gameplay elements.

This game is worth every penny. For a modest 409 rupees (6.1 USD) the game has a really good price, for what you are getting.

This game is nothing like I played before and it sure blew me away. Polynomial is the game which you can count on to relax your senses. You might be having a bad day or just a normal day, Polynomial 2 will definitely lift your senses.