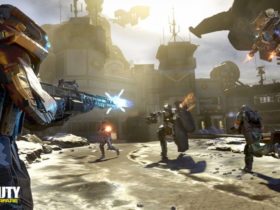 There are a few difficult bosses in the game and this guide will show how to beat one of them – Cadre.

This bot is Victor’s henchman. He will appear on the way to the distress signal. This bot is a beast bodied corebot with immense physical strength. Don’t go near him. Keep a distance from him and destroy his purple shield. Then, switch over to white ammo to defeat this comparatively easier boss.