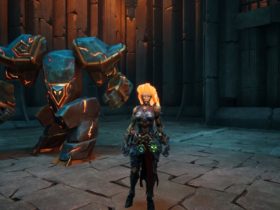 Ubisoft was previously known to release a new Assassin’s Creed game every year. This time, however, they changed it up a bit. There hasn’t been a release last year and fans are expecting the newest one to launch sometime this year.

However you may take the secrecy of Ubisoft at this point, as we haven’t gotten more than a few smudges of leaks and rumors floating around. While, some of them are true, others are blown out of proportion.

The latest leak which reddit had left us was an in-game screenshot of the upcoming Assassin’s Creed: Origins. There has been a lot of discussion about the game on reddit and 4chan and we have gathered the summery done by a reddit user Valtari5.

To say that this discussion is irreverent wouldn’t be correct, the discussion on the 4chan left us with a few clues/leaks about the upcoming Assassin’s Creed game. One, there will not be any multiplayer, and the game will be 100% story driven. Though , there will be micro transactions.

The combat system in Assassin’s Creed: Origins have been reworked, and we may be left with a very good, The Witcher 3 type, weighted feeling combat system. There will also be naval warfare like some people assumed from the leaked picture.

An interesting thing which caught my eye was the possibly new “synchronize” system, instead of massive towers you had to climb, you just chuck an Eagle over your shoulder and he’ll do all the scouting for you.

It’s highly suggested you read through the highly extensive list of possible features and intended leaks by the company in the above mentioned reddit and 4chan threads. If all of this is true, we may be seeing one of the best Assassin’s Creed game of all time.